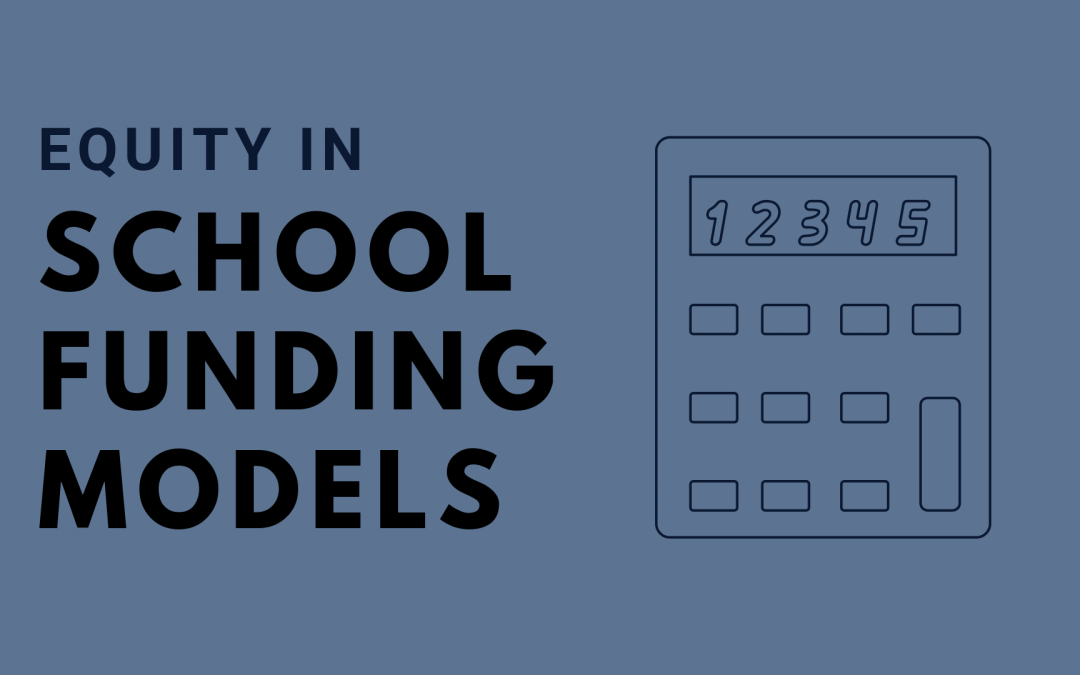 In March 2019, we had a highly attended and interactive FEC webinar where we discussed Equity in School Funding Models. Many who attended, and many who didn’t, requested a recording of the webinar. Unfortunately, we forgot to hit the “record” button on Zoom. Fortunately, even though I don’t have an audio or video file to share with you, I do have a manuscript of everything mentioned during the main focus of the webinar. Feel free to read and share the notes below!

We will do our best next time to hit “record.”

Equity is not Equality. Equity creates equality by prioritizing resources to students who need them the most.

For example, think of a typical track meet. There are eight runners – each in their own lane. Each runner must run one lap around the track and the first runner to complete the lap, wins the race.

So, equality would mean that every runner would start the race at the exact same spot in their lane. However, the track is oval-shaped. So, if each runner began at the same spot, each runner’s distance to the finish line would be different. The runner in the innermost lane would run a shorter distance than the runner in the outermost lane. So, they would both start in the same spot (EQUAL), but the runners in the innermost lanes would have an advantage – at least in distance – than the other runners in the outermost lanes.

This is precisely why track races do not operate this way. Because the track is oval-shaped, each runner begins the race in their own lane, but at different, equal distance, spots along the track; ensuring that each runner, runs the exact same distance needed to complete the race.

Now, think of our current public education system in this same context. Students – regardless of race, geography, household makeup – start on the same marker on the track. Some students, like the runner in the outermost lane, have to run harder and faster to get to the finish line. Now, the barrier in a track race is distance, but In the real world, barriers include coming from a low-income, marginalize neighborhood, single-parent household, having a disability that requires additional expertise, having a language barrier, having outdated technology, or inexperienced teachers or access to critical supportive services.

Meanwhile, the runner in the innermost lane has it a lot easier. They don’t have to run as fast or as hard to get to the finish line because of their initial position in the race. The barriers here are fewer in number. In terms of education, these innermost runners attend schools in high-income neighborhoods with a surplus of resources. These students have the advantage of local tax-based funding formulas, parent-led fundraising and/or private funding, and state-of-the-art technology.

So what we at the FE Coalition want to see is education reform that promotes fairness. For us, fairness is equity.

“Equality means giving all students the exact same thing to meet the same expectations. Equity means holding people of differing needs to a single expectation and giving them what they need to achieve it.” – Debby Irving, author.

What is that expectation: at a minimum, it should be college-career readiness, post-secondary ready.

The first thing we need to be aware of, is that public schools are primarily funded by local and state sources, and on average the federal government pays for less than 10 percent, of k-12 education.

Second, school funding system is heavily reliant on geography, zip-codes, and therefor, a school district’s resources often come down to how wealthy an area is and how much residents pay in taxes, that can be property taxes or some other measure that is usually reflective of the community’s SES.

And because of this, school funding is largely characterized by disparity.

So, why is this important? Well, because as ministers and Christian leaders who care about BIblical justice, we need to be aware of policies and funding models that perpetuate funding disparities, especially when we are talking about “public” institutions. I’ll just pause to say, I find it hard to call something a “public” institution when it’s funding reflects a private and localized-funding model.

Continuing on, we also need to be able to notice policies and funding models in our own states that seek to remedy, to placate this funding disparity.

Which brings us to what I wanted to discuss very briefly with you.

Now, I wanted to draw attention to a OBF model that is also tied to fair teacher compensation.

In the Texas’ OBF model, if this law were to pass, Teachers would be incentivized for improved student performance on benchmark tests. That means that if student scores improve, the teacher salaries improved.

Now, if you’ve been around education long enough you know that there are a lot of people opposed to OBF or PBF because there are concerns that this will only create greater income disparity between communities of different SES, meaning, high-performing schools (usually in high-income neighborhoods) will continue to do well and so will get even more funding, and low-performing schools (usually in low-income neighborhoods) will continue to do poorly and so not quality for additional funding. I’ve included a link to an article by Valerie Strauss in the Washington Post who expresses her opposition to this proposed Texas policy.

However, what’s important to note is that this OBF is aimed at providing greater equity and better teachers in marginalized communities by factoring in the SES of the students who meet benchmark standards. For example,

A high-SES student meeting standards will qualify the school/district to receive an additional $1,450 per student.

A low-SES student meetings standards will quality the school/district to receive an additional $3,400 per student.

Now, this additional funding goes toward teacher salary. (We will come back as to why this is important)

Now, the article I shared with you, which I encourage you to read, gives an example funding calculation that illustrates why Ms. Strauss, the author, opposes this funding model. However, Ms. Strauss assumed that poor performing lower-SES schools would continue to perform poorly. What she doesn’t show is that even if low-SES students begin to improve marginally, the additional funding that the school/district receives increases exponentially.

So why is important to talk about OBF and Fair Teacher Compensation together? Because equity isn’t just about seeing that poor-performing and low-SES schools have access to more money, it’s about also having access to quality teachers. Student performance and outcomes are directly and largely associated with the quality of the teacher.

When a school district has more money than other districts, they are able to attract high-quality teachers, and so teachers who want to be justly compensated for their work will often get pulled from schools in low-SES communities, where they have had success, to a school that can pay them more and provide additional classroom resources.

But, if our schools/districts can find a way to justly compensate and competitively compensate our high quality teachers who are serving in the most challenging communities, then, not only do they feel their work is honored, but they be more at ease with continuing to serve in low-SES communities.

[Teachers] should be empowered and not micro-managed, and they should be given the resources to teach vs. digging into their own pockets to support the children they love and lead. Most importantly, our best teachers should be placed systemically in front of our children who need them the most, and they should be paid more for taking on the additional challenges of hunger, homelessness, trauma and toxic stress too often found in high-poverty communities.”

Paragraph from an open letter from Todd A. Williams, Chairman of The Commit Opportunity, to the Texas Education Agency

There is a story from the Dallas ISD, I’ve included a link to the story there – https://www.dallasnews.com/news/education/2018/05/16/high-poverty-neighborhood-elementary-matching-scores-dallas-affluent-schools

In 2018, 79% of fifth grader’s at Highland Park’s McCulloch Intermediate School met standards in math. So for example, if there were 100 fifth graders at the school, and if the OBF model were in place the school would receive an additional $114,000 dollars.

Now, Blanton Elementary which is in the Dallas ISD, not particularly an affluent district. In 2015, 67% of fifth graders met standards in math. Inn 2018, that number went up to 82%. That means that they received higher scores than the more affluent school district. Two things to note: that means that students, no matter their background, can exceed expectations, but two that also means if there were 100 fifth graders at the school, and if the OBF model were in place the school would receive an additional $278,000 dollars.

Now, the reason I highlight this story, not only because it shows us that student outcomes can improve, but because I recently met with Josue Tamarez Torres, 2017-2018 Dallas ISD Teacher of the Year, who is a math teacher at Blanton who was a large reason for this success. Now, currently Dallas ISD has a OBF model in place. We discussed outcomes-based funding and he highlighted that this type of compensation was one of the main reasons that he decided and was able to continue teaching in the public education school system in Dallas ISD.

So, not only is this funding model impacting equitable funding for schools, but also equitable distribution of quality teachers.

First, it needs to be Student-Focused – We are not just paying teachers just to pay them more, but because it directly and positively impacts the instruction of students in the classroom.

Second we want it to be Equity-Focused. States and districts need to ask themselves, will this compensation system widen the resource disparity that exists between high-SES districts and low-SES districts or is it aimed at shrinking the disparity?

And third – Outcome-focused – The ultimate measure of a successful OBF model and teacher compensation model is not that the teacher is able to take an extended trip in the summer, but that ultimately students coming out of our public education system are college or career ready.

And that is ultimately, what we want to see.