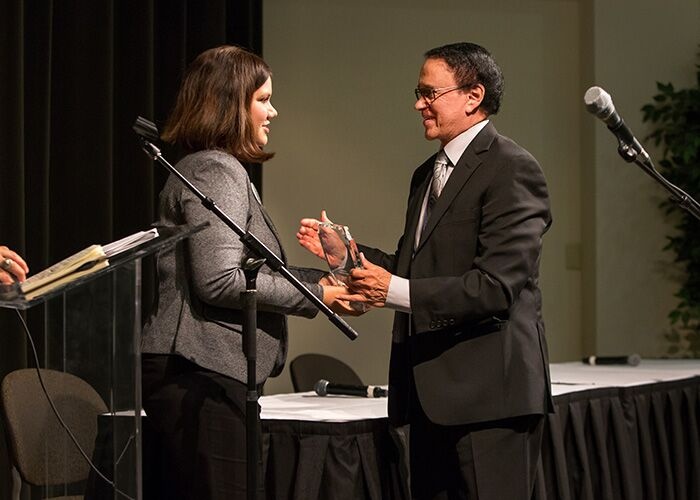 Southwestern Professor of Missions Daniel Sanchez has served in numerous positions in the field of missions and academia, from missionary in Guatemala to evangelism director of the Baptist Convention of New York; from academic dean at Panama Baptist Theological Seminary to director of Southwestern Seminary’s Scarborough Institute for Church Growth. In addition, he has traveled to various countries around the world to teach in seminaries and local churches, devoting special attention to those in Latin America. Because of these protracted efforts to further God’s Kingdom throughout the world, during a meeting of the National Hispanic Christian Leadership Conference (NHCLC) on the campus of Southwestern Seminary, Oct. 13, Sanchez received the Lifetime Impact Award.

This award is presented once a year by the NHCLC, America’s largest Hispanic Christian evangelical organization. It was presented to Sanchez as a surprise at the end of the one-day conference by Andrea Ramirez, executive director of the Faith and Education Coalition of the NHCLC.

“Dr. Sanchez is such a humble man,” Ramirez said, “but he has a long list of things that the Lord has called him to do and that he has obeyed and is doing. … We want to honor you for a lifetime of being an education advocate and for being a cultural translator wherever you are in different committees that you served on at different institutions.”

Upon accepting the award, Sanchez received a standing ovation. In addition to the conference attendees, Southwestern President Paige Patterson, First Lady Dorothy Patterson, and Executive Vice President and Provost Craig Blaising, among other Southwestern administrators, were present to honor Sanchez for his lifetime of global impact.

As Sanchez accepted the award with tears, Ramirez, on behalf of all in attendance, prayed over him. She thanked God for what He has done in Sanchez’s life and for all that Sanchez represents—that is, “all the different individuals that he has helped to equip to love [God] with all of their minds.”

To read more about Sanchez’s ministry, including his worldwide network of ministry relationships and special impact on the Hispanic world, see the winter 2015 issue of Southwestern News:swbts.edu/southwesternnews/winter-2015.