Military Families Get Short-Changed in Education: They Deserve Better 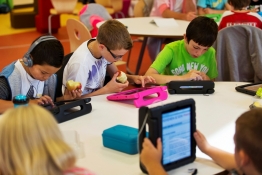 At seven years old, I learned about the harsh realities of the world. Due to racial prejudice my parents moved the family from South Texas to California. It was difficult leaving family, friends, and a school where I excelled academically. After attending the final months of first grade, my parents were told that I was lacking in educational fundamentals, was not ready to move on to second grade, and would have a difficult repeat of first grade due to the challenging academic standards of the California school systems. My parents were stunned, I ranked at the top of my class in Texas. But the school in California had much higher academic standards

Think about that: I did not have the reading, writing and math skills necessary to start second grade in California. Fortunately, my mother was a high school graduate. She persuaded administrators to provide text books and assignments for a complete summer review of first grade. She spent the summer teaching me – four hours every day in preparation for an opportunity to be retested by school administrators. We were successful. I passed the test and was able to proceed with peers to second grade. She overcame discouragement and disappointment in order to give me an opportunity to stay on course academically for my age. She knew that being held back would be devastating for me.

To this day, I am thankful for the sacrifice of my parents. Mom was not able to work and add to the family finances because of her commitment to teach me. I do not know how many other parents have experienced this shock and disappointment because of varying academic standards. For most parents and families, a summer committed to teaching is not an option. Nevertheless, we celebrated the blessings and favor of God through a difficult academic challenge that paved the way toward achievement of future academic goals.

Some may see as a small accomplishment in light of the problems of the world. How many problems we could solve if everyone benefited from consistent high quality education that begins right from the start.

While my experience was unique, I wonder about the academic anxieties experienced by parents who move from one state to another because of job opportunities. I am concerned for military families who face the same challenges when moving from one state to another. On average, military families will move six to nine times during the course of the career of at least one active-duty parent. Every single one of those children deserves better than to hear that their academic progress is below grade-level at a new school because of varied state academic standards.

The U.S. Army will soon be releasing the results of a study of local schools surrounding its bases. A report advancing that, called the Stimson Report, notes that some of the communities around bases with low-performing schools are in states with lesser education standards. The Army’s commitment to meeting the needs of its soldiers and their families may very well shift resources to states with lower academic standards to fulfill the promise of a high-quality education for military children.

As a board member of the National Hispanic Christian Leadership Conference serving 40,000+ Evangelical churches in the United States, I am committed to seeing that Hispanic children have the same opportunities as other students. The Bible speaks of justice. It is unjust for parents and students to face living in a mobile society where varied academic standards exist from state to state.

Despite an improvement in educational outcomes over the last 20 years, Hispanic students still graduate from high school at a rate 10 percent lower than white students. These statistics should concern the military. In 2011, 16.9 percent of new recruits were Hispanics, and Hispanics make up more than 11 percent of active-duty forces, according to the Department of Defense.

I take great pride in serving my country through the United States Marine Corps. I know that tens of thousands of other Hispanics share pride in their military service for our country. They also take pride in their families, by ensuring their children and grandchildren have the tools for academic success. Hispanic parents are keenly aware that the road to success begins with a high-quality education, so we’re pleased to see states working to address the patchwork of academic standards that still exists. Common goals and standards which can be compared across states are offering hope for military families, migrant families, every American family. Our shared hope is for our children’s futures, where there are consistently high academic standards for all.