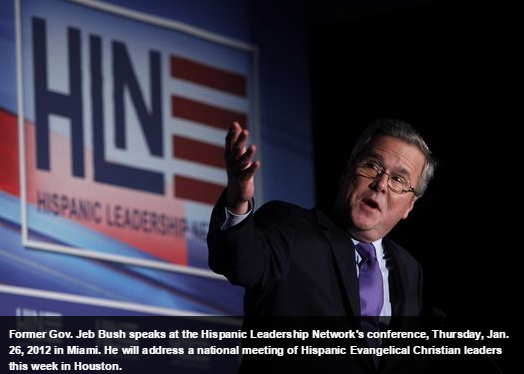 When the National Hispanic Christian Leadership Conference (NHCLC) gathers in Houston this week, we are united by a simple symbol: a cross. And like that cross, our shared mission is both vertical and horizontal. Vertically, we stand connected to God and His kingdom. Horizontally, to our left and to our right, we stand connected to family, culture, society and community. The members of our 40,000 Hispanic Evangelical churches in the U.S. care deeply about issues that lie along both these planes, issues such as faith, life, family, religious liberty, education and immigration.

I would like to propose something different for prospective candidates vying for a presidential nomination and courting the Hispanic vote or the Evangelical vote: don’t talk about diversity, talk about inclusion. Don’t talk about opting out, talk about opting in. It’s time to remind Americans that we are not only one nation under God, but we are also a nation of liberty and justice for all.

This Wednesday, over 1,000 Hispanic Evangelical pastors at our national convention will have the opportunity to hear from two Republicans who embrace the Christian conservative ethos of the NHCLC — Jeb Bush and Mike Huckabee. While there are any number of “wedge” issues that candidates and their campaign supporters use to distinguish themselves from others, where the candidates stand on immigration and education reform will be critical not just to secure the support of the NHCLC but to reach the constituents of the more than 40,000 Evangelical Hispanic churches we represent. What I would like to hear is how candidates plan to reclaim the mantle of compassionate conservatism in which families and faith come first, and political orthodoxy provides a path to success rather than circles of division.

Our faith requires us to honor the imago dei in every person, enabling each to fulfill the potential God has given them. This holds true for students as much as adults, which is why I support non-federal high education standards which can be compared across states. Hispanic students graduate high school at a rate 10% lower than their white classmates. So many Hispanics fight to make it to the United States, and to see the education system failing our children is unacceptable.

While everyone seems engulfed in a debate over the semantics of the term Common Core, we need a common sense solution to address the educational disparity in America. The patchwork of academic standards across states has not been adequately preparing high school graduates for career or college. Research shows that 28 to 40% of enrolled college students need at least one remedial course; for a working student struggling to afford tuition, having to pay to learn material he or she should have learned in high school is just wrong. With nearly 40% of U.S. employers saying they have trouble finding workers with the job skills they need, the labor situation is dire.

Schools must be held accountable for the quality of education they provide, and high academic standards which can be compared across states are a key step toward educational equity. High academic benchmarks are the path to a high-quality education; individual district and school curricula are the steps on that path. And the end of the journey is a bright future for all students, where a high school diploma means as much in Ohio as it does in Iowa, Alabama or New Hampshire.

What I find most disappointing is hearing respected leaders reverse themselves because a political poll tells them to do so. We cannot expect to remain the world’s only superpower leading from behind polls. Strong, compassionate leaders understand that it is the right decisions, not the ones made on the altar of political expediency that will benefit our country for the future.

Just as our faith demands that we do better for Hispanic students, justice demands that we reconcile the rule of law with a process that does not tear families apart. Current immigration laws promote unjust working conditions and even human trafficking by making it near-impossible coupled with exorbitant costs to wait for legal means to enter this country.

Immigration reform is quickly becoming one of the most divisive issues our country has seen in generations, and it threatens to tear us apart. Inflammatory rhetoric leading to an “us vs. them” environment gets us nowhere, and does nothing to help the millions of Hispanics who live in fear of selective enforcement that makes a mockery of the law. This is dehumanizing, and denies people the ability to thrive as God wishes us to do.

I pray that the candidates who emerge from the 2016 presidential primaries will model themselves as compassionate leaders who put human beings first and politics a distant runner-up to last place. Common-sense immigration reform that prioritizes families, and education reform that starts with common goals of preparing all students to succeed in college and in the workplace, should be among the first steps taken. As the president of the NHCLC, I look forward to walking alongside a candidate who has the strength to take this path.